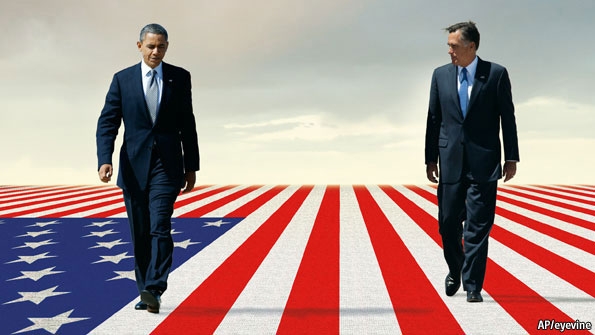 (11/3/2012) FOUR years ago, The Economist endorsed Barack Obama for the White House with enthusiasm. So did millions of voters. Next week Americans will trudge to the polls far less hopefully. So (in spirit at least) will this London-based newspaper. Having endured a miserably negative campaign, the world’s most powerful country now has a much more difficult decision to make than it faced four years ago.

That is in large part because of the woeful nature of Mr Obama’s campaign. A man who once personified hope and centrism set a new low by unleashing attacks on Mitt Romney even before the first Republican primary. Yet elections are about choosing somebody to run a country. And this choice turns on two questions: how good a president has Mr Obama been, especially on the main issues of the economy and foreign policy? And can America really trust the ever-changing Mitt Romney to do a better job? On that basis, the Democrat narrowly deserves to be re-elected.

Mr Obama’s first term has been patchy. On the economy, the most powerful argument in his favour is simply that he stopped it all being a lot worse. America was in a downward economic spiral when he took over, with its banks and carmakers in deep trouble and unemployment rising at the rate of 800,000 a month. His responses—an aggressive stimulus, bailing out General Motors and Chrysler, putting the banks through a sensible stress test and forcing them to raise capital (so that they are now in much better shape than their European peers)—helped avert a Depression. That is a hard message to sell on the doorstep when growth is sluggish and jobs scarce; but it will win Mr Obama some plaudits from history, and it does from us too.

Two other things count, on balance, in his favour. One is foreign policy, where he was also left with a daunting inheritance. Mr Obama has refocused George Bush’s “war on terror” more squarely on terrorists, killing Osama bin Laden, stepping up drone strikes (perhaps too liberally, see article) and retreating from Iraq and Afghanistan (in both cases too quickly for our taste). After a shaky start with China, American diplomacy has made a necessary “pivot” towards Asia. By contrast, with both the Israeli-Palestinian dispute and his “reset” with Russia, he overreached and underdelivered. Iran has continued its worrying crawl towards nuclear weapons.

All these problems could have been anticipated. The Arab spring could not. Here Mr Obama can point to the ousting of tyrants in Egypt and Libya, but he has followed events rather than shaping them, nowhere more so than with the current carnage in Syria. Compared with, say, George Bush senior, who handled the end of the cold war, this aloof, disengaged man is no master diplomat; set beside the younger Bush, however, Mr Obama has been a safe pair of hands.

The other qualified achievement is health reform. Even to a newspaper with no love for big government, the fact that over 40m people had no health coverage in a country as rich as America was a scandal. “Obamacare” will correct that, but Mr Obama did very little to deal with the system’s other flaw—its huge and unaffordable costs. He surrendered too much control to left-wing Democrats in Congress. As with the gargantuan Dodd-Frank reform of Wall Street, Obamacare has generated a tangle of red tape—and left business to deal with it all.

It is here that our doubts about Mr Obama set in. No administration in many decades has had such a poor appreciation of commerce. Previous Democrats, notably Bill Clinton, raised taxes, but still understood capitalism. Bashing business seems second nature to many of the people around Mr Obama. If he has appointed some decent people to his cabinet—Hillary Clinton at the State Department, Arne Duncan at education and Tim Geithner at the Treasury—the White House itself has too often seemed insular and left-leaning. The obstructive Republicans in Congress have certainly been a convenient excuse for many of the president’s failures, but he must also shoulder some blame. Mr Obama spends regrettably little time buttering up people who disagree with him; of the 104 rounds of golf the president has played in office, only one was with a Republican congressman.

Above all, Mr Obama has shown no readiness to tackle the main domestic issue confronting the next president: America cannot continue to tax like a small government but spend like a big one. Mr Obama came into office promising to end “our chronic avoidance of tough decisions” on reforming its finances—and then retreated fast, as he did on climate change and on immigration. Disgracefully, he ignored the suggestions of the bipartisan Bowles-Simpson deficit commission that he himself set up. More tellingly, he has failed to lay out a credible plan for what he will do in the next four years. Virtually his entire campaign has been spent attacking Mr Romney, usually for his wealth and success in business.

Many a Mitt makes a muddle

Mr Obama’s shortcomings have left ample room for a pragmatic Republican, especially one who could balance the books and overhaul government. Such a candidate briefly flickered across television screens in the first presidential debate. This newspaper would vote for that Mitt Romney, just as it would for the Romney who ran Democratic Massachusetts in a bipartisan way (even pioneering the blueprint for Obamacare). The problem is that there are a lot of Romneys and they have committed themselves to a lot of dangerous things.

Take foreign policy. In the debates Mr Romney stuck closely to the president on almost every issue. But elsewhere he has repeatedly taken a more bellicose line. In some cases, such as Syria and Russia (see article), this newspaper would welcome a more robust position. But Mr Romney seems too ready to bomb Iran, too uncritically supportive of Israel and cruelly wrong in his belief in “the Palestinians not wanting to see peace”. The bellicosity could start on the first day of his presidency, when he has vowed to list China as a currency manipulator—a pointless provocation to its new leadership that could easily degenerate into a trade war.

Or take reducing the deficit and reforming American government. Here there is more to like about Mr Romney. He generally believes in the smaller state we would rather see; he would slash red tape and his running-mate, Paul Ryan, has dared to broach much-needed entitlement reform.

Yet far from being the voice of fiscal prudence, Mr Romney wants to start with huge tax cuts (which will disproportionately favour the wealthy), while dramatically increasing defence spending. Together those measures would add $7 trillion to the ten-year deficit. He would balance the books through eliminating loopholes (a good idea, but he will not specify which ones) and through savage cuts to programmes that help America’s poor (a bad idea, which will increase inequality still further). At least Mr Obama, although he distanced himself from Bowles-Simpson, has made it clear that any long-term solution has to involve both entitlement reform and tax rises. Mr Romney is still in the cloud-cuckoo-land of thinking you can do it entirely through spending cuts: the Republican even rejected a ratio of ten parts spending cuts to one part tax rises. Backing business is important, but getting the macroeconomics right matters far more.

Mr Romney’s more sensible supporters explain his fiscal policies away as necessary rubbish, concocted to persuade the fanatics who vote in the Republican primaries: the great flipflopper, they maintain, does not mean a word of it. Of course, he knows in current circumstances no sane person would really push defence spending, projected to fall below 3% of GDP, to 4%; of course President Romney would strike a deal that raises overall tax revenues, even if he cuts tax rates.

However, even if you accept that Romneynomics may be more numerate in practice than it is in theory, it is far harder to imagine that he will reverse course entirely. When politicians get elected they tend to do quite a lot of the things they promised during their campaigns. François Hollande, France’s famously pliable new president, was supposed to be too pragmatic to introduce a 75% top tax rate, yet he is steaming ahead with his plan. We weren’t fooled by the French left; we see no reason why the American right will be more flexible. Mr Romney, like Mr Hollande, will have his party at his back—and a long record of pandering to them.

Indeed, the extremism of his party is Mr Romney’s greatest handicap. The Democrats have their implacable fringe too: look at the teachers’ unions. But the Republicans have become a party of Torquemadas, forcing representatives to sign pledges never to raise taxes, to dump the chairman of the Federal Reserve and to embrace an ever more Southern-fried approach to social policy. Under President Romney, new conservative Supreme Court justices would try to overturn Roe v Wade, returning abortion policy to the states. The rights of immigrants (who have hardly had a good deal under Mr Obama) and gays (who have) would also come under threat. This newspaper yearns for the more tolerant conservatism of Ronald Reagan, where “small government” meant keeping the state out of people’s bedrooms as well as out of their businesses. Mr Romney shows no sign of wanting to revive it.

The devil we know

We very much hope that whichever of these men wins office will prove our pessimism wrong. Once in the White House, maybe the Romney of the mind will become reality, cracking bipartisan deals to reshape American government, with his vice-president keeping the headbangers in the Republican Party in line. A re-elected President Obama might learn from his mistakes, clean up the White House, listen to the odd businessman and secure a legacy happier than the one he would leave after a single term. Both men have it in them to be their better selves; but the sad fact is that neither candidate has campaigned as if that is his plan.

As a result, this election offers American voters an unedifying choice. Many of The Economist’s readers, especially those who run businesses in America, may well conclude that nothing could be worse than another four years of Mr Obama. We beg to differ. For all his businesslike intentions, Mr Romney has an economic plan that works only if you don’t believe most of what he says. That is not a convincing pitch for a chief executive. And for all his shortcomings, Mr Obama has dragged America’s economy back from the brink of disaster, and has made a decent fist of foreign policy. So this newspaper would stick with the devil it knows, and re-elect him.

Re-blogged from The Economist.  Original here:

This site uses Akismet to reduce spam. Learn how your comment data is processed.